skip to main | skip to sidebar

April is turning out to be an amazing month for boylesque.  In addition to the two monthly boylesque shows - Homo Erectus at the Stonewall and Power Strip at The C.O.W. - this is the weekend for the 3rd Annual New York Boylesque Festival.

The first night featured a veritable smorgasbord of local and international boylesque dancers.  Hosted by The World Famous *BOB* - a talented performer in her own right, and someone who really knows how to fire up a crowd - the evening featured some of New York's most talented boylesque stars, including Matt Knife (of Homo Erectus), Lucky Charming (of Power Strip), Hard Corey, Johnny Panic, Gogo Gadget, Jack Nasty, Brooklyn Irons, Jason Mejias, and the oh so aptly named Mr. Gorgeous.

A good audience really helps make a good burlesque show, and last night's raucous audience was there to party.  Naturally, the performers gave them more than their money's worth.

As amazed as I was by the first day's performers, I can only imagine what tonight's "main event" at B.B. King's will be like.

Tickets are still available.  The doors open at 6 PM; the show starts at 8 PM. 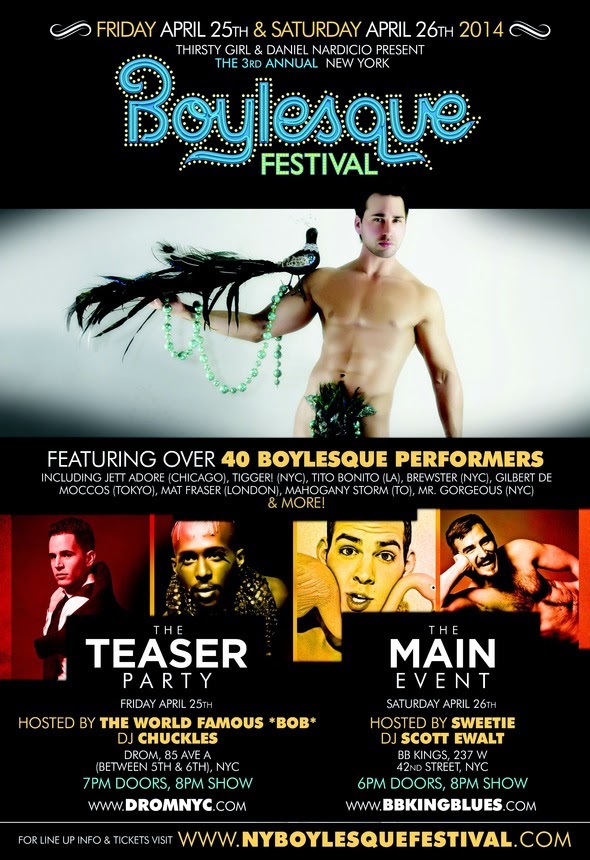 Posted by Byrne Harrison at 5:38 PM No comments:

Newer Posts Older Posts Home
Subscribe to: Posts (Atom)
If you have a listing that you would like included on GT-NYC, contact Byrne Harrison. Please put GT-NYC in the subject line.